Written by Jeswanth P
Updated over a week ago

Earlier on SmartReach, you could filter prospects based on their status i.e. Email Open, Replied, Opened but Not Replied, Not Opened, Not Sent etc. . Apart from that we had the option to search prospect by typing the relevant search term in the grid at the top.

Though the system was intuitive enough, we have got a number of requests to have a more robust filtering system that can allow our users handle more complex filtering.
Specifically to filter prospects based on two or more conditions.

We have acceded to your requests to introduce a new filtering system that works on the 3 options. 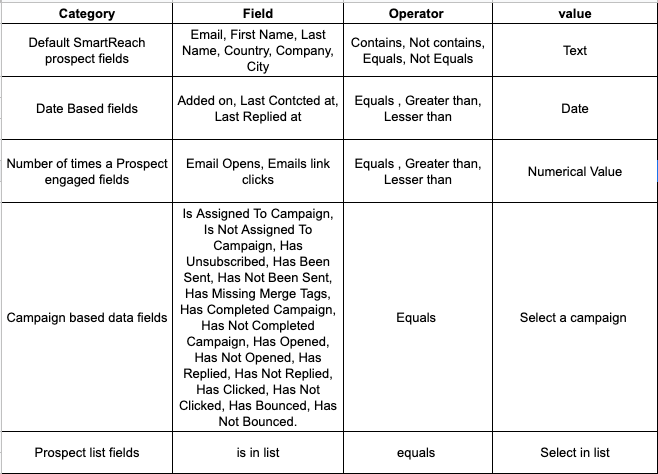 Let's say from the prospects in your table, you want to identify prospects from a particular company who haven't opened your emails to retarget them with different email campaign.

Apart from this we also can use sub filters. Sub filters are like a group of filters that can be combined together or grouped together. Let's say we want a engage prospects of two different companies who have shown interest previously by replying to a different campaign.

Did this answer your question?